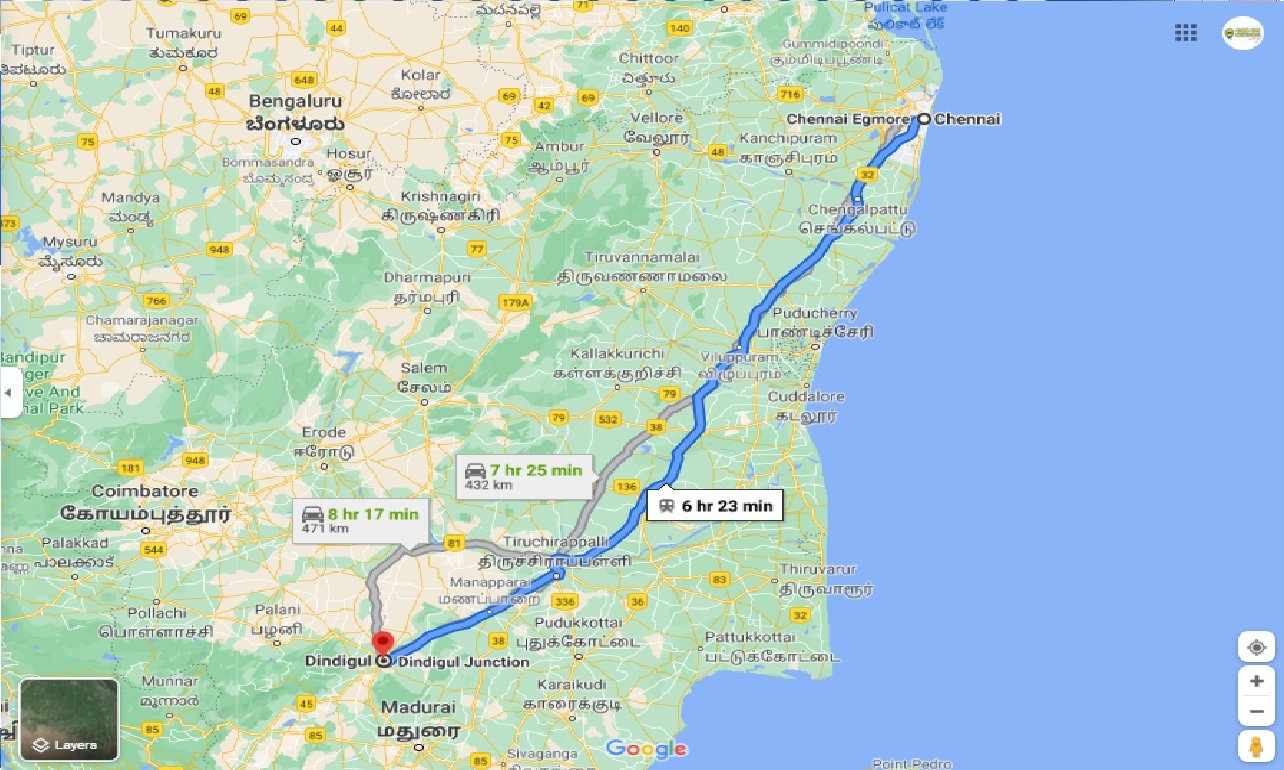 Hire Cab from Chennai To Dindigul Round Trip

Book Chennai To Dindigul cab, compare Car fares & check for online discounts & deals on Chennai To Dindigul taxi Service. Clean Cars, No Extra Charges. 8888807783. Chennai, on the Bay of Bengal in eastern India, is the capital of the state of Tamil Nadu. The city is home to Fort St. George, built in 1644 and now a museum showcasing the cityâ€™s roots as a British military garrison and East India Company trading outpost, when it was called Madras. Religious sites include Kapaleeshwarar Temple, adorned with carved and painted gods, and St. Maryâ€™s, a 17th-century Anglican church.

Dindigul is a city in the Indian state of Tamil Nadu. It is the administrative headquarters of the Dindigul district. Dindigul is located 420 km southwest from the state capital, Chennai, 100 km away from Tiruchirappalli and 66 km away from Madurai.

Distance and time for travel between Chennai To Dindigul cab distance

Distance between Chennai To Dindigul 439.5 km by Road along with an aerial distance. The Distance can be covered in about 07 hours 35 minutes by Chennai To Dindigul cab. Your Dindigul travel time may vary due to your bus speed, train speed or depending upon the vehicle you use.

Spots to Visit in Dindigul

When renting a car for rent car for Chennai To Dindigul, its best to book at least 1-2 weeks ahead so you can get the best prices for a quality service. Last minute rentals are always expensive and there is a high chance that service would be compromised as even the taxi provider is limited to whatever vehicle is available at their disposal.

The best season or months to visit places in Dindigul are February, October, November, December. There are 53 tourist places in Dindigul, which can be explored by travellers. Local attractions can be visited at any time of the day, be it early morning, afternoon, evening or night, as suitable for travellers.

Chennai To Dindigul Round Trip Taxi

Why should we go with car on rentals for Chennai To Dindigul by car book?

When you rent a car from Chennai To Dindigul taxi services, we'll help you pick from a range of car rental options in Chennai . Whether you're looking for budget cars, comfortable cars, large cars or a luxury car for your trip- we have it all.We also provide Tempo Travelers for large groups. Chennai To Dindigul car hire,You can choose between an Indica, Sedan, Innova or luxury cars like Corolla or Mercedes depending on the duration of your trip and group size.