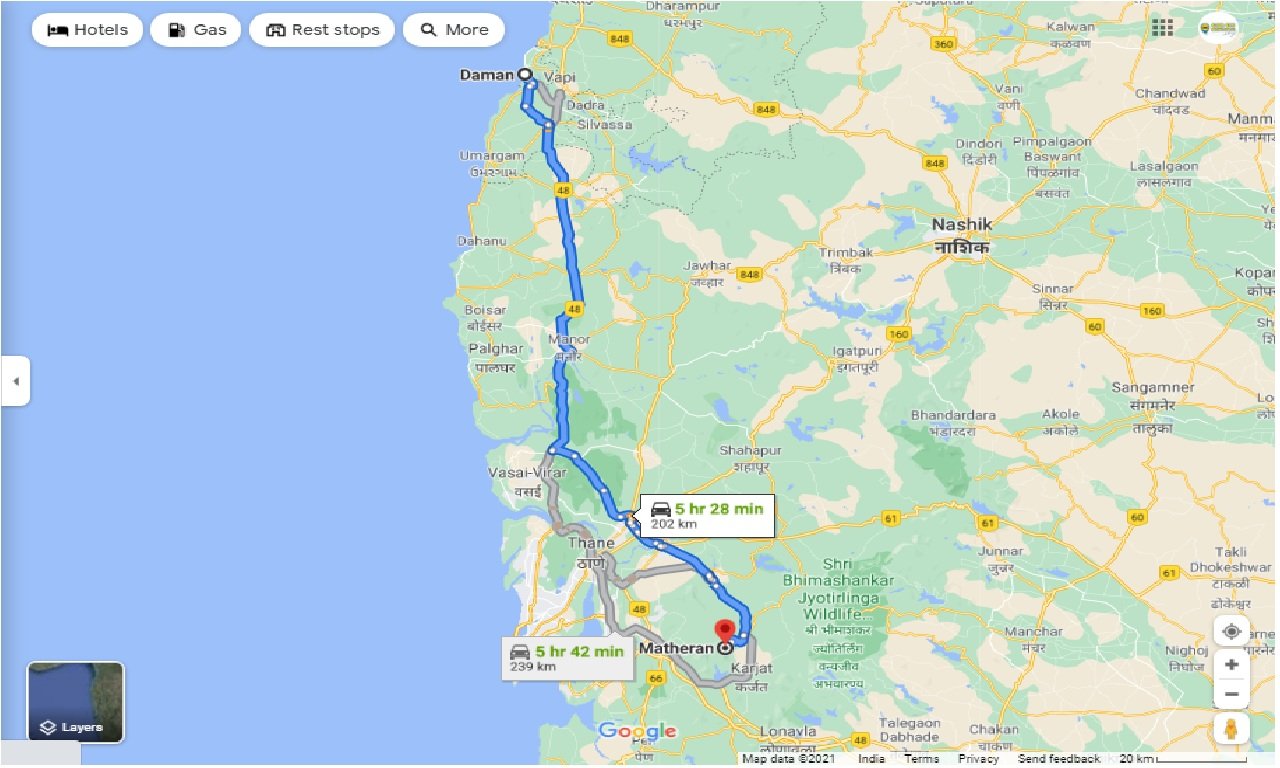 Hire Cab from Daman To Matheran Round Trip

Book Daman To Matheran cab, compare Car fares & check for online discounts & deals on Daman To Matheran taxi Service. Clean Cars, No Extra Charges. 8888807783. Daman and Diu, a union territory in west India, consists of 2 separate areas divided by the Arabian Sea. The Daman Ganga River flows through the coastal town of Daman. Diu is a small island and mainland village. The Fort of Moti Daman, Diu Fort and 16th-century churches reflect the territoryâ€™s past as a Portuguese colony. In the town of Moti Daman, the Basilica of Bom Jesus Church is known for its gilt altarpiece.

Matheran is a hill station, near Mumbai, in the west Indian state of Maharashtra. Itâ€™s known for its mild climate and well-preserved colonial architecture. Motor vehicles are banned and many visitors arrive by narrow-gauge railway on the 1907 Neralâ€“Matheran Toy Train. The Panorama Point lookout offers views across the mountains of the Western Ghats. Louisa Point has views of waterfalls and the ancient Prabal Fort.

Distance and time for travel between Daman To Matheran cab distance

Distance between Daman To Matheran is 220.8 km by Road along with an aerial distance. The Distance can be covered in about 04 hours 14 minutes by Daman To Matheran cab. Your Matheran travel time may vary due to your bus speed, train speed or depending upon the vehicle you use.

Spots to Visit in Matheran

When renting a car for rent car for Daman To Matheran, its best to book at least 1-2 weeks ahead so you can get the best prices for a quality service. Last minute rentals are always expensive and there is a high chance that service would be compromised as even the taxi provider is limited to whatever vehicle is available at their disposal.

The best time to visit Matheran is Summer from March - June. Being a hill station you can visit any time of the year as it has a charming and calm weather that bewitches tourists. Regardless, summers are the best respite from other cities.

Daman To Matheran Round Trip Taxi

Why should we go with car on rentals for Daman To Matheran by car book?

When you rent a car from Daman To Matheran taxi services, we'll help you pick from a range of car rental options in Daman . Whether you're looking for budget cars, comfortable cars, large cars or a luxury car for your trip- we have it all.We also provide Tempo Travelers for large groups. Daman To Matheran car hire,You can choose between an Indica, Sedan, Innova or luxury cars like Corolla or Mercedes depending on the duration of your trip and group size.