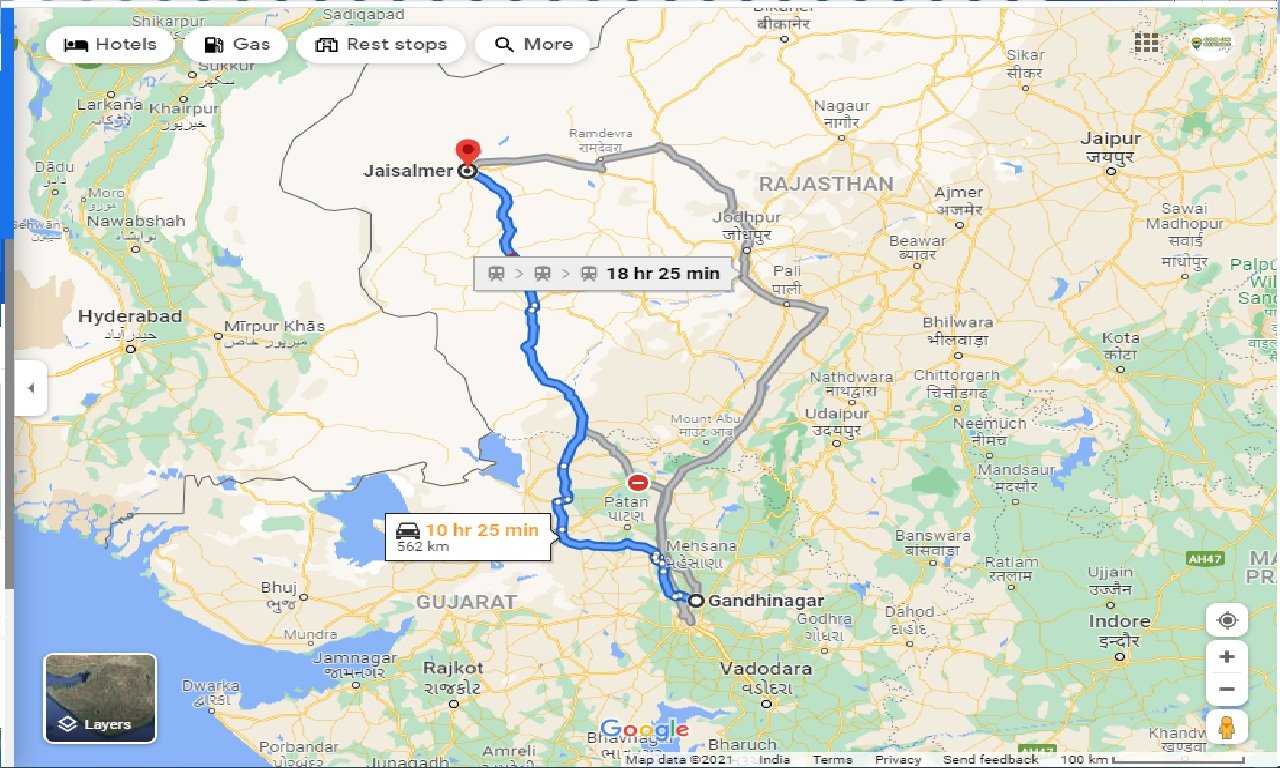 Hire Cab from Gandhinagar To Jaisalmer Round Trip

Book Gandhinagar To Jaisalmer cab, compare Car fares & check for online discounts & deals on Gandhinagar To Jaisalmer taxi Service. Clean Cars, No Extra Charges.8888807783. Gandhinagar is a planned city in the western Indian state of Gujarat. The Akshardham is a massive Hindu temple with ornate carvings and sculpted pillars, plus a water show in its sprawling gardens. Dandi Kutir museum traces the life of leader Mahatma Gandhi, who was born in Gujarat. South, along the Sabarmati River, the Indroda Nature Park has a zoo and botanical gardens, plus an adjacent dinosaur and fossil park.

DescriptionJaisalmer is a former medieval trading center and a princely state in the western Indian state of Rajasthan, in the heart of the Thar Desert. Known as the "Golden City," it's distinguished by its yellow sandstone architecture. Dominating the skyline is Jaisalmer Fort, a sprawling hilltop citadel buttressed by 99 bastions. Behind its massive walls stand the ornate Maharaja's Palace and intricately carved Jain temples.

Distance and time for travel between Gandhinagar To Jaisalmer cab distance

When renting a car for rent car for Gandhinagar To Jaisalmer, its best to book at least 1-2 weeks ahead so you can get the best prices for a quality service. Last minute rentals are always expensive and there is a high chance that service would be compromised as even the taxi provider is limited to whatever vehicle is available at their disposal.

The best time to visit Jaisalmer is from November to March when winter comes to the desert city offering a pleasing weather. This time the temperature remains between 5 degrees and 24 degrees centigrade.

Gandhinagar To Jaisalmer Round Trip Taxi

Why should we go with car on rentals for Gandhinagar To Jaisalmer by car book?

When you rent a car from Gandhinagar To Jaisalmer taxi services, we'll help you pick from a range of car rental options in Gandhinagar . Whether you're looking for budget cars, comfortable cars, large cars or a luxury car for your trip- we have it all.We also provide Tempo Travelers for large groups. Gandhinagar To Jaisalmer car hire,You can choose between an Indica, Sedan, Innova or luxury cars like Corolla or Mercedes depending on the duration of your trip and group size.