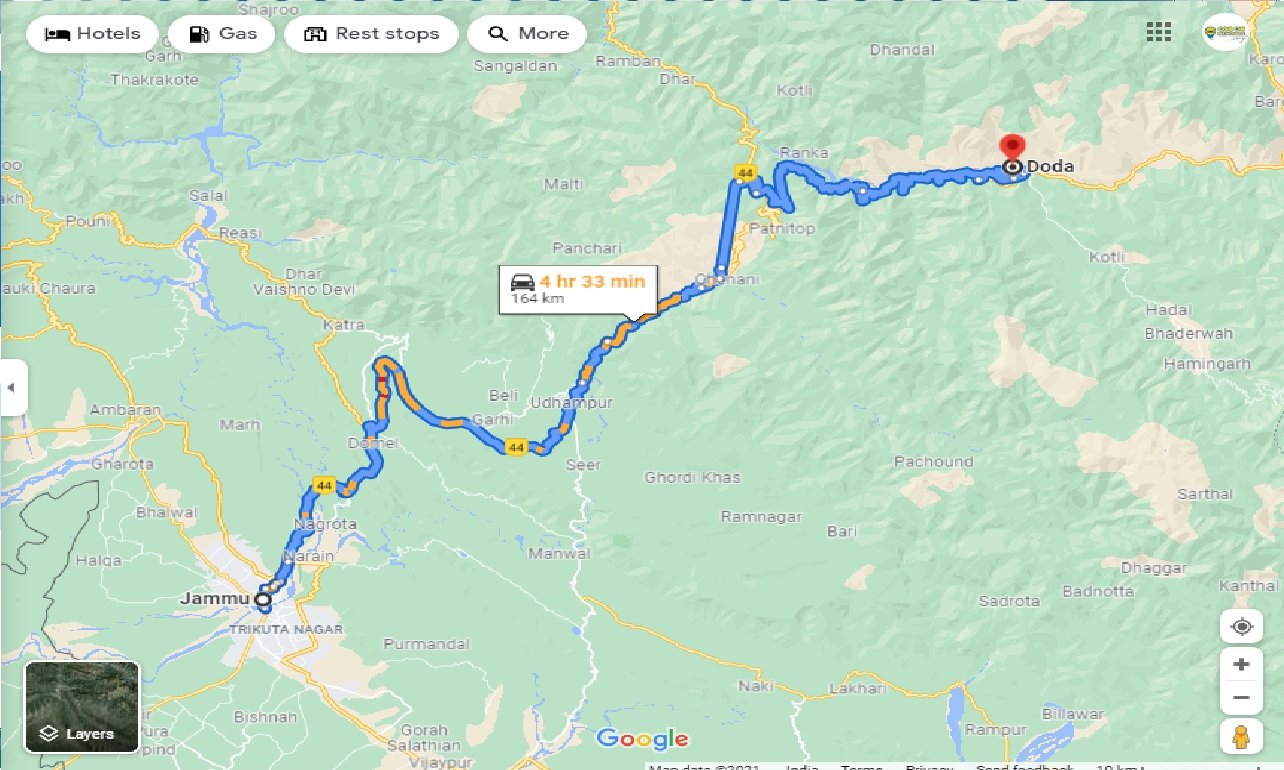 Hire Cab from Jammu To Doda Round Trip

Book Jammu To Doda cab, compare Car fares & check for online discounts & deals on Jammu To Doda taxi Service. Clean Cars, No Extra Charges.8888807783. Jammu is the winter capital and the largest city in Jammu district of the Indian union territory of Jammu and Kashmir. Lying on the banks of the river Tawi, the city of Jammu, with an area of 26.64kmÂ², is surrounded by the Himalayas in the north and the northern-plains in the south.

Doda is a district in eastern part of Jammu Division of the Indian Union territory of Jammu and Kashmir. The district consists of 8 Tehsils: Bhagwa, Assar, Doda, Gundana, Marmat, Bhaderwah, Gandoh, and Thathri.

Distance and time for travel between Jammu To Doda cab distance

Distance between Jammu To Doda is 164.8 km by Road along with an aerial distance. The Distance can be covered in about 04 hours 38 minutes by Jammu To Doda cab. Your Doda travel time may vary due to your bus speed, train speed or depending upon the vehicle you use.

Spots to Visit in Doda

When renting a car for rent car for Jammu To Doda, its best to book at least 1-2 weeks ahead so you can get the best prices for a quality service. Last minute rentals are always expensive and there is a high chance that service would be compromised as even the taxi provider is limited to whatever vehicle is available at their disposal.

The best season or months to visit places in Doda are April, May, June. There are 13 tourist places in Doda, which can be explored by travellers. Local attractions can be visited at any time of the day, be it early morning, afternoon, evening or night, as suitable for travellers.

Jammu To Doda Round Trip Taxi

Why should we go with car on rentals for Jammu To Doda by car book?

When you rent a car from Jammu To Doda taxi services, we'll help you pick from a range of car rental options in Jammu . Whether you're looking for budget cars, comfortable cars, large cars or a luxury car for your trip- we have it all.We also provide Tempo Travelers for large groups. Jammu To Doda car hire,You can choose between an Indica, Sedan, Innova or luxury cars like Corolla or Mercedes depending on the duration of your trip and group size.

Narain
narainsinghrb@gamil.com
Please
narainsingh
narain@sipi-ip.sg
Py
Ravi Agrawal
Raviagrawak007@gmail.com
We hired the taxi administrations from Car On Rentals for seven days during our Tamil Nadu trip. The vehicle given was a decent one and our driver Ramanna was extremely useful and a dependable individua
Pooja Roy
Poojaroy112@rediffmail.com
We had a decent experience in Car on rentals.Its a decent choice with tolerable rates contrasted with other vendors.The taxi was very much kept up, perfect and clean. thanks car on rentals.
Akshay Jadhav
Akshayjdv1@gmail.com
I visited Kerala 2 times.This time I booked Car on Rentals for my encounter with companions and it was a generally excellent decision.My companion alluded to their name and from the start of the booking procedure itself they were receptive and gave me proper guidelines.
Amit jha
amitjha@gmail.com
It was an incredible alleviation to have such a neighborly taxi service,when we were a long way from home. Our beat explorer was all around kept up with rich insides and drove lightings. I came to know them from Google and reached them.They gave me sensible rates and all the administrations were superb.
Komal Chavam
chavankomal@gmail.com
Car On rentals best help last time my outing delhi agra jaipur and udaipur give driver is pleasant and experience all tripe driver time to time pickup and safe driving so bless your heart.
Kedar Shinde
kedarshinde005@gmail.com
You have given good condition vehicle and excellent driver .. as usual your customer support team is upto marked. Comfortabley completed our trip.thank you very much.
Amjad Khan
khanamjadaa@gmail.com
driver on time . we reach on time to our distination , perfect service , 5 star to driver & for cab condition. lookig more ride with you guys.
Prashant aggrawal
Prashantagrawals@gmail.com
We requested a Hindi or English speaking driver & same provided to us , Thank you for it , driver was very good having a knowledge about the routes , overall having a good trip.
Shubham mandve
shubhammandve@gmail.com
I requested the vehicle in one hour , my family member want to visit nagpur to relative house at last minitue . thank you for arranging the vehicle . driver came in said time. nice driver with neat cab , good service provided at last minitue. 5 star
Uttam Roy
Had a great experience with Budget at mumbai. Overall very pleased and will use them again when I come see my parents again.
vasant shinde
The costumer service was great and the car was neat and clean.
vijay mallesh
Only complaints have to do with cars not very clean. Otherwise Budget is as good or better than the competition. travel again.
Naina Borse
Good service and price. Really appreciate that they waited for our delayed flight to arrive at 2 AM, but it was a welcome gesture after a long day of travel.
archana sing
excellent service provided by caronrentals.