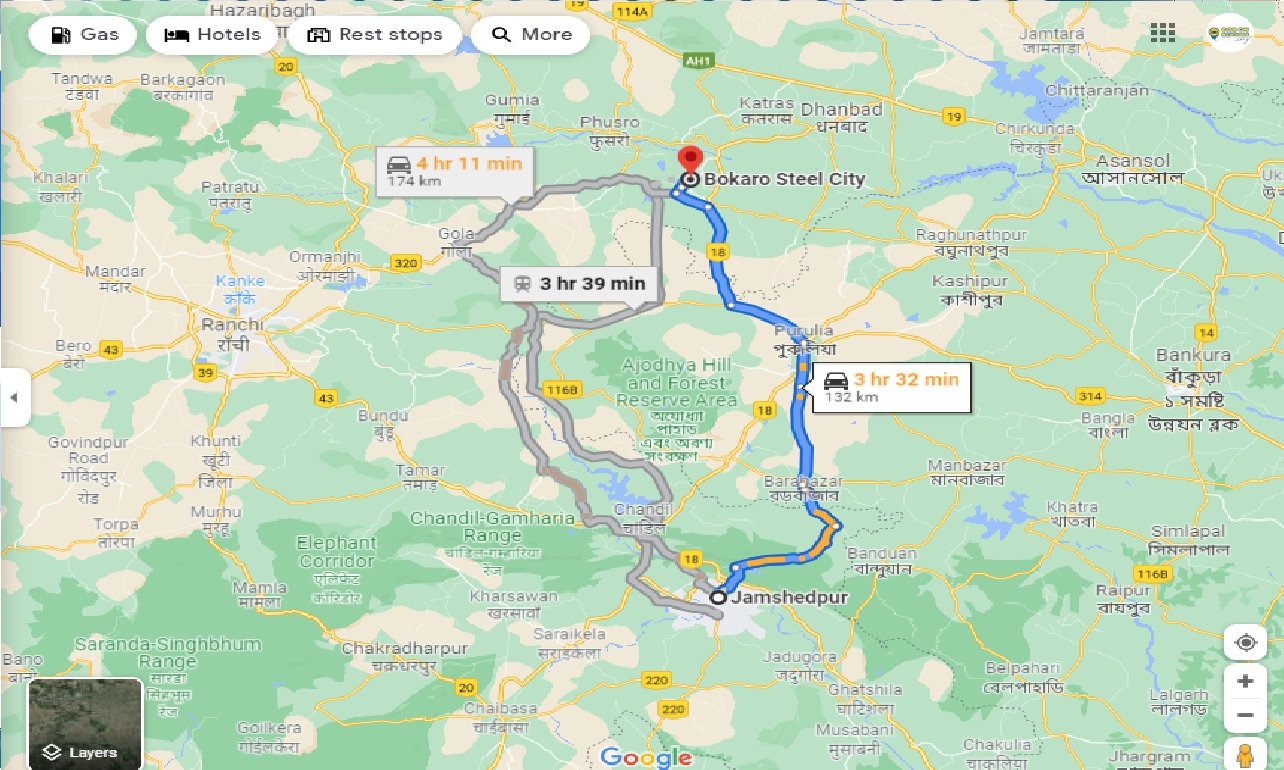 Hire Cab from Jamshedpur To Bokaro Round Trip

Book Jamshedpur To Bokaro cab, compare Car fares & check for online discounts & deals on Jamshedpur To Bokaro taxi Service. Clean Cars, No Extra Charges.8888807783. Jamshedpur is a large city set between the Subarnarekha and Kharkai rivers in the east Indian state of Jharkhand. Itâ€™s known for huge, tree-lined Jubilee Park, where the Tata Steel Zoological Park has resident species including tigers and leopards. To the east, the hilltop Bhuvaneshwari Temple has an elaborate 5-story entrance tower. North of the city, elephants roam through the forests at Dalma Wildlife Sanctuary.

Bokaro Steel City is one of the planned cities of India, a major industrial centre and the fourth largest city in the Indian state of Jharkhand. It is the administrative headquarters of Bokaro district. The city stands at an elevation of 210 metres above sea level and has an urban area of 183 square kilometres.

Distance and time for travel between Jamshedpur To Bokaro cab distance

Distance between Jamshedpur To Bokaro is 133.8 km by Road along with an aerial distance. The Distance can be covered in about 03 hours 26 minutes by Jamshedpur To Bokaro cab. Your Bokaro travel time may vary due to your bus speed, train speed or depending upon the vehicle you use.

Spots to Visit in Bokaro

When renting a car for rent car for Jamshedpur To Bokaro, its best to book at least 1-2 weeks ahead so you can get the best prices for a quality service. Last minute rentals are always expensive and there is a high chance that service would be compromised as even the taxi provider is limited to whatever vehicle is available at their disposal.

The best period to visit Bokaro is during the festive months of September to the beginning of spring in February. The city is known to have a moderate climate with temperatures ranging from anywhere between 20 to 5 degree Celsius in the winter season. Hence, one is required to carry adequate woollens while travelling during the winters. The winter also brings out the picnic spirit among the locals who are famous for being lovers of picnic.

Jamshedpur To Bokaro Round Trip Taxi

Why should we go with car on rentals for Jamshedpur To Bokaro by car book?

When you rent a car from Jamshedpur To Bokaro taxi services, we'll help you pick from a range of car rental options in Jamshedpur . Whether you're looking for budget cars, comfortable cars, large cars or a luxury car for your trip- we have it all.We also provide Tempo Travelers for large groups. Jamshedpur To Bokaro car hire,You can choose between an Indica, Sedan, Innova or luxury cars like Corolla or Mercedes depending on the duration of your trip and group size.