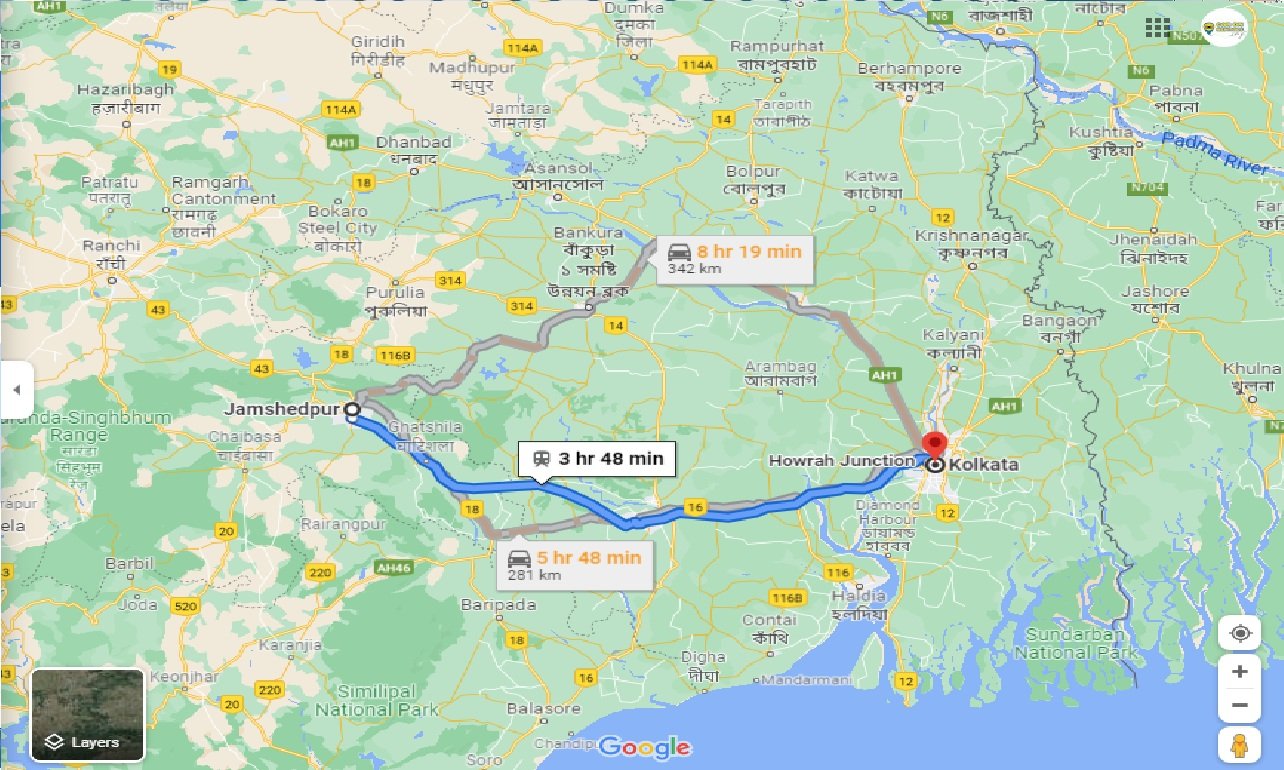 Hire Cab from Jamshedpur To Kolkata Round Trip

Book Jamshedpur To Kolkata cab, compare Car fares & check for online discounts & deals on Jamshedpur To Kolkata taxi Service. Clean Cars, No Extra Charges.8888807783. Jamshedpur is a large city set between the Subarnarekha and Kharkai rivers in the east Indian state of Jharkhand. Itâ€™s known for huge, tree-lined Jubilee Park, where the Tata Steel Zoological Park has resident species including tigers and leopards. To the east, the hilltop Bhuvaneshwari Temple has an elaborate 5-story entrance tower. North of the city, elephants roam through the forests at Dalma Wildlife Sanctuary.

Kolkata (formerly Calcutta) is the capital of India's West Bengal state. Founded as an East India Company trading post, it was India's capital under the British Raj from 1773â€“1911. Today itâ€™s known for its grand colonial architecture, art galleries and cultural festivals. Itâ€™s also home to Mother House, headquarters of the Missionaries of Charity, founded by Mother Teresa, whose tomb is on site.

Distance and time for travel between Jamshedpur To Kolkata cab distance

Spots to Visit in Kolkata

When renting a car for rent car for Jamshedpur To Kolkata, its best to book at least 1-2 weeks ahead so you can get the best prices for a quality service. Last minute rentals are always expensive and there is a high chance that service would be compromised as even the taxi provider is limited to whatever vehicle is available at their disposal.

October-March: Starting from autumn the weather is pleasant and is a great time to visit Kolkata. Apart from the weather, this is also the time for festivals. Kolkata comes alive during Durga Puja as there are numerous pandals all over the city with beautiful idols or Goddess Durga and multiple street food stalls.

Jamshedpur To Kolkata Round Trip Taxi

Why should we go with car on rentals for Jamshedpur To Kolkata by car book?

When you rent a car from Jamshedpur To Kolkata taxi services, we'll help you pick from a range of car rental options in Jamshedpur . Whether you're looking for budget cars, comfortable cars, large cars or a luxury car for your trip- we have it all.We also provide Tempo Travelers for large groups. Jamshedpur To Kolkata car hire,You can choose between an Indica, Sedan, Innova or luxury cars like Corolla or Mercedes depending on the duration of your trip and group size.