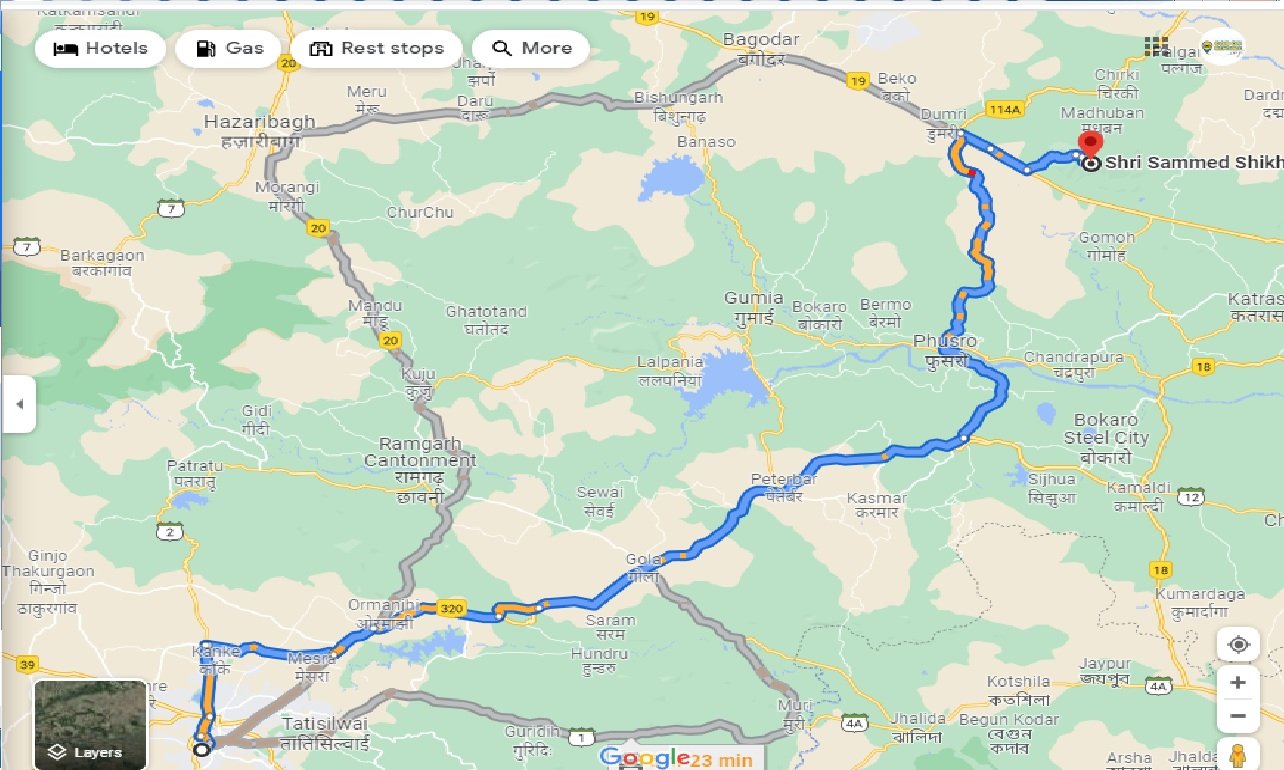 Hire Cab from Ranchi To Shikharji Round Trip

Book Ranchi To Shikharji cab, compare Car fares & check for online discounts & deals on Ranchi To Shikharji taxi Service. Clean Cars, No Extra Charges.8888807783. Ranchi is the capital of the Indian state of Jharkhand. Ranchi was the centre of the Jharkhand movement, which called for a separate state for the tribal regions of South Bihar, northern Orissa, western West Bengal and the eastern area of what is present-day Chhattisgarh.

Shikharji, Giridih district, Jharkhand, India, is located on Parasnath hill, the highest mountain in the state of Jharkhand. It is the most important Jain Tirtha (pilgrimage site) for the Jains, believed to be the place where twenty of the twenty-four Jain tirthankaras along with many other monks attained Moksha, according to Nirvana Kanda and other texts.[1] Its distance to cover is 28 kms by walk and takes approximately to climb up and down the hill. If a short route is taken it takes approximately 12 hours to complete.

Distance and time for travel between Ranchi To Shikharji cab distance

Distance between Ranchi To Shikharji is 156.8 km by Road along with an aerial distance. The Distance can be covered in about 04 hours 46 minutes by Ranchi To Shikharji cab. Your Shikharji travel time may vary due to your bus speed, train speed or depending upon the vehicle you use.

When renting a car for rent car for Ranchi To Shikharji, its best to book at least 1-2 weeks ahead so you can get the best prices for a quality service. Last minute rentals are always expensive and there is a high chance that service would be compromised as even the taxi provider is limited to whatever vehicle is available at their disposal.

Must visit Jain pilgrimage. Shikharji is a difficult pilgrimage. It's best to start by 2:30-3:00 am so that you can't see the ascend and cover most of the 1st 9 kms before sunrise. It can be really windy up there so be sure to cover your ears.

Ranchi To Shikharji Round Trip Taxi

Why should we go with car on rentals for Ranchi To Shikharji by car book?

When you rent a car from Ranchi To Shikharji taxi services, we'll help you pick from a range of car rental options in Ranchi . Whether you're looking for budget cars, comfortable cars, large cars or a luxury car for your trip- we have it all.We also provide Tempo Travelers for large groups. Ranchi To Shikharji car hire,You can choose between an Indica, Sedan, Innova or luxury cars like Corolla or Mercedes depending on the duration of your trip and group size.