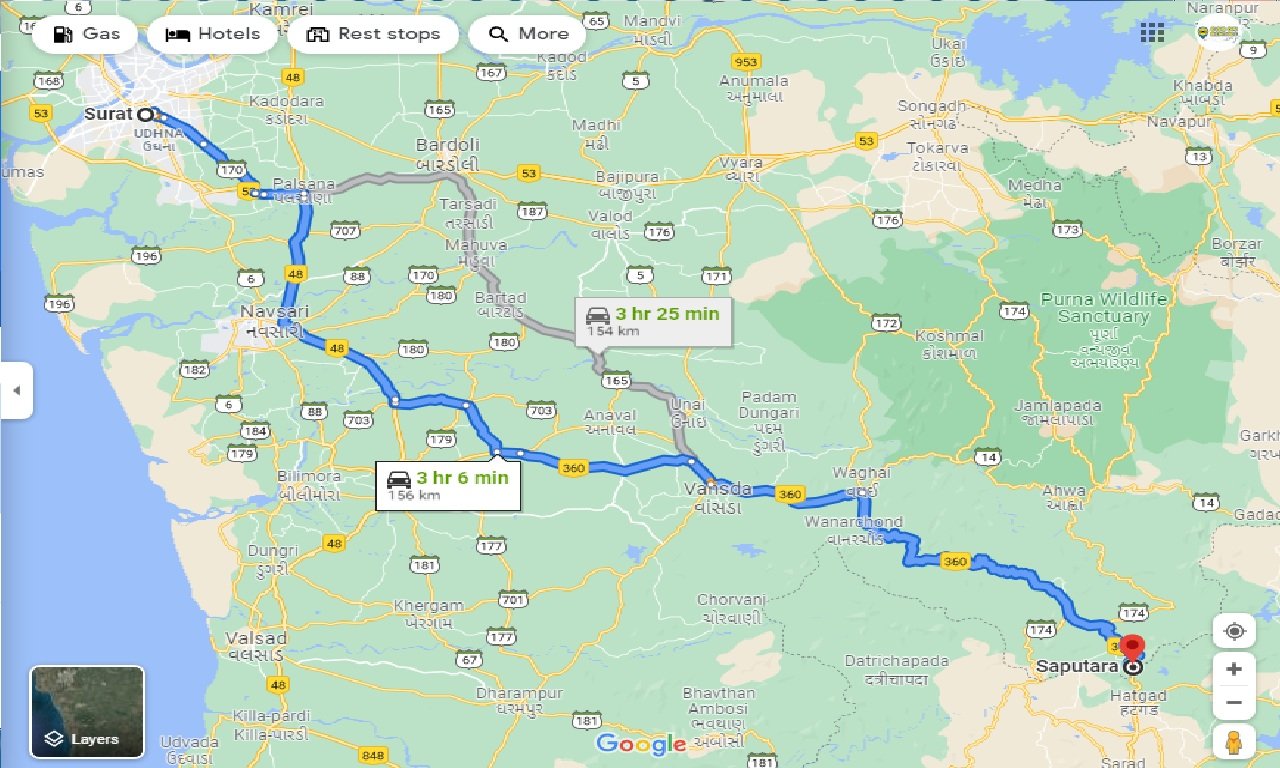 Hire Cab from Surat To Saputara Round Trip

Book Surat To Saputara cab, compare Car fares & check for online discounts & deals on Surat To Saputara taxi Service. Clean Cars, No Extra Charges.8888807783. Surat is a large city beside the Tapi River in the west Indian state of Gujarat. Once known for silk weaving, Surat remains a commercial center for textiles, and the New Textile Market area is lined with fabric shops. Overlooking the river, Surat Castle was built in the 1500s to defend the city against Portuguese colonists. Nearby, the Dutch, Armenian and English cemeteries contain elaborate colonial-era tombs.

Saputara is a hill town in the west Indian state of Gujarat. The Artist Village cultural center displays, and sells, tribal arts and crafts. Artifacts, including ritual objects, trace the heritage of the local Dang tribe at Saputara Tribal Museum. Green spaces with picnic spots include the Step Garden and the Lake Garden, set on Lake Saputara. Governorâ€™s Hill Trail offers views of the surrounding rivers and valleys.

Distance and time for travel between Surat To Saputara cab distance

Distance between Surat To Saputara is 157.8 km by Road along with an aerial distance. The Distance can be covered in about 03 hours 22 minutes by Surat To Saputara cab. Your Saputara travel time may vary due to your bus speed, train speed or depending upon the vehicle you use.

Spots to Visit in Saputara

When renting a car for rent car for Surat To Saputara, its best to book at least 1-2 weeks ahead so you can get the best prices for a quality service. Last minute rentals are always expensive and there is a high chance that service would be compromised as even the taxi provider is limited to whatever vehicle is available at their disposal.

Saputara welcomes tourists all year around, but the best season to visit is from October to February when the weather is the most pleasant. Winter is just around the corner and the temperature drops a little on this hill station.

Surat To Saputara Round Trip Taxi

Why should we go with car on rentals for Surat To Saputara by car book?

When you rent a car from Surat To Saputara taxi services, we'll help you pick from a range of car rental options in Surat . Whether you're looking for budget cars, comfortable cars, large cars or a luxury car for your trip- we have it all.We also provide Tempo Travelers for large groups. Surat To Saputara car hire,You can choose between an Indica, Sedan, Innova or luxury cars like Corolla or Mercedes depending on the duration of your trip and group size.