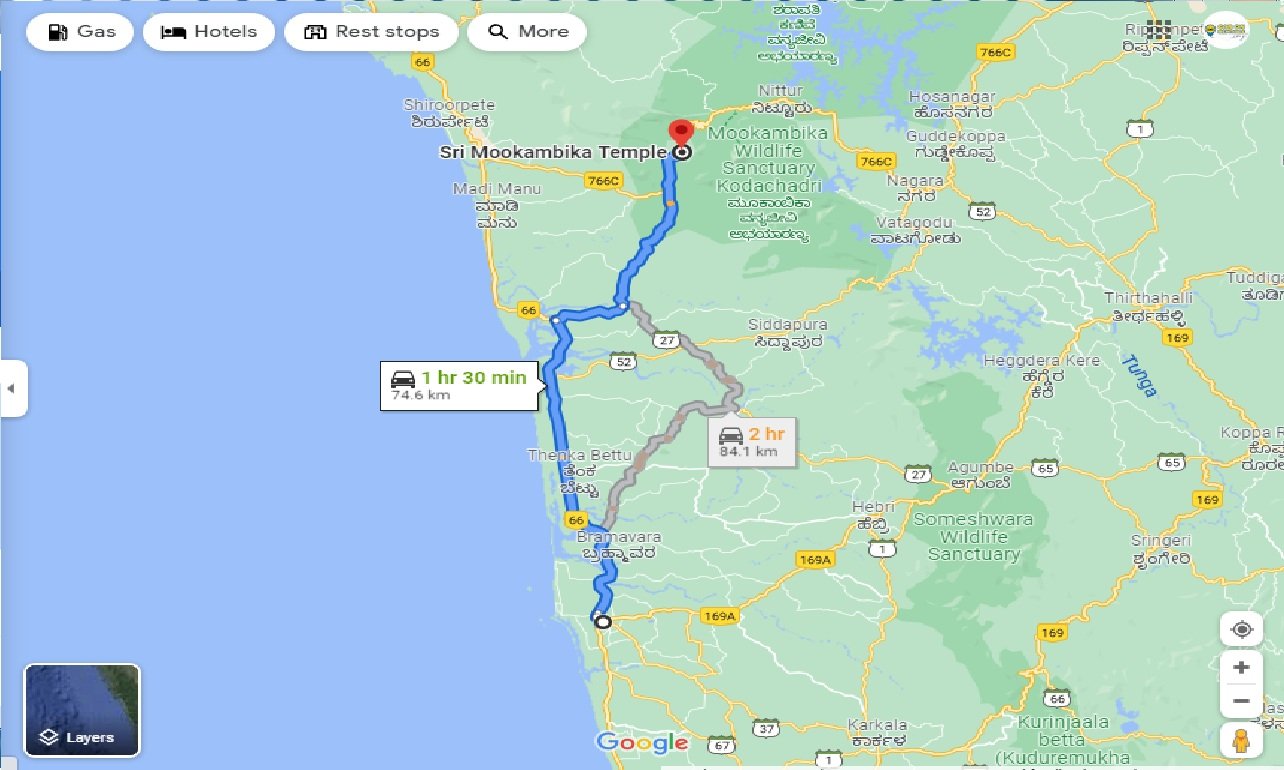 Hire Cab from Udupi to Mookambika Round Trip

Book Udupi to Mookambika cab, compare Car fares & check for online discounts & deals on Udupi to Mookambika taxi Service. Clean Cars, No Extra Charges.8888807783. Udupi is a city in the southwest Indian state of Karnataka. It's known for its Hindu temples, including the huge, 13th-century Sri Krishna Temple, which houses a statue of Lord Krishna and attracts many pilgrims. Nearby, the ancient Anantheshwara Temple is dedicated to the god Shiva. The Corporation Bank Heritage Museum features coins dating from 400 BC, plus stamps and displays about Indiaâ€™s banking industry.

Mookambika is the Hindu goddess who is representing Adi Parashakti, who is known simply as Shakti or Parvati. Adishakti is the original creator, preserver and destroyer of the whole universe.She is often depicted with three eyes and four arms with a divine disc and conch.

Distance and time for travel between Udupi to Mookambika cab distance

Distance between Udupi to Mookambika is 72.8 km by Road along with an aerial distance. The Distance can be covered in about 01 hours 36 minutes by Udupi to Mookambika cab. Your Mookambika travel time may vary due to your bus speed, train speed or depending upon the vehicle you use.

Spots to Visit in Mookambika

When renting a car for rent car for Udupi to Mookambika, its best to book at least 1-2 weeks ahead so you can get the best prices for a quality service. Last minute rentals are always expensive and there is a high chance that service would be compromised as even the taxi provider is limited to whatever vehicle is available at their disposal.

Karthika masa (November-December) is also auspicious time to worship Mookambika. The annual car festival will be normally during March. Especially Vijaya Dashami day is considered to be the most auspicious day to begin the education program for of children (vidhyarambha).

Udupi to Mookambika Round Trip Taxi

Why should we go with car on rentals for Udupi to Mookambika by car book?

When you rent a car from Udupi to Mookambika taxi services, we'll help you pick from a range of car rental options in Udupi . Whether you're looking for budget cars, comfortable cars, large cars or a luxury car for your trip- we have it all.We also provide Tempo Travelers for large groups. Udupi to Mookambika car hire,You can choose between an Indica, Sedan, Innova or luxury cars like Corolla or Mercedes depending on the duration of your trip and group size.