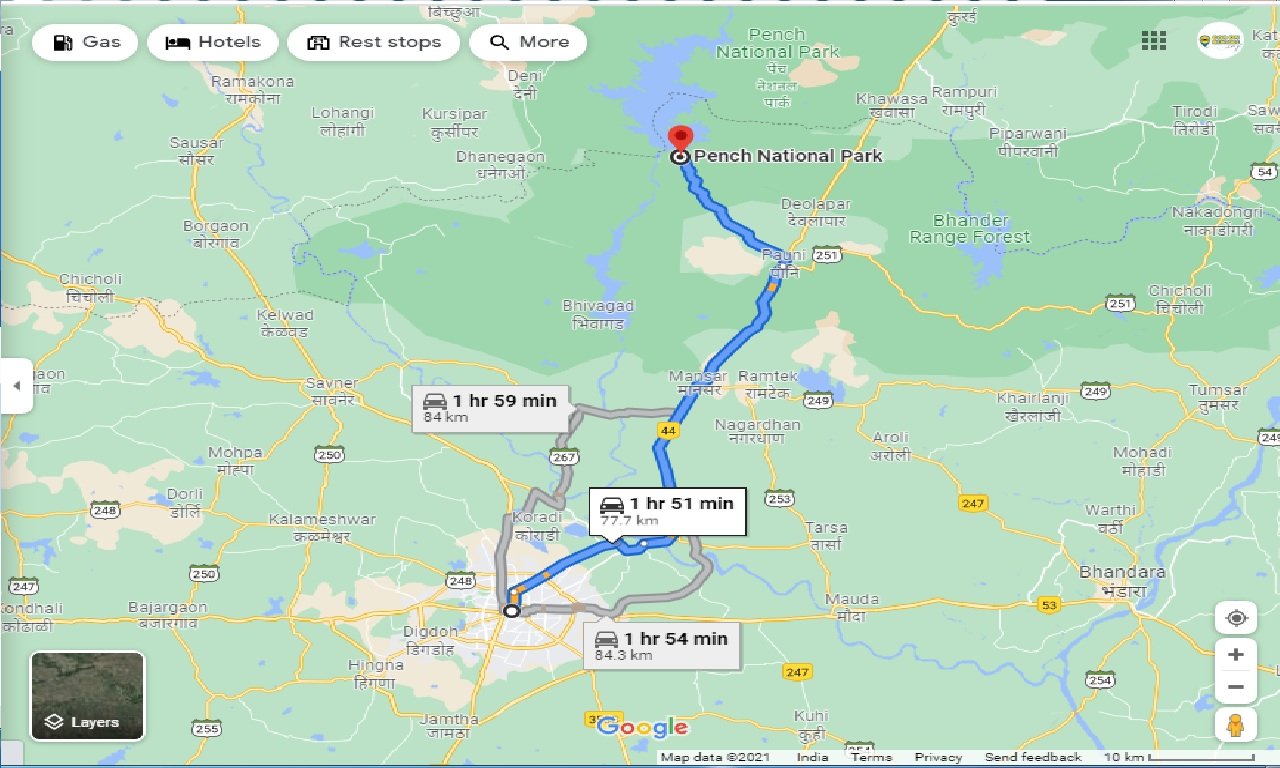 Hire Cab from Nagpur To Pench One Way

One Way taxi from Nagpur To Pench car. Book One Way taxi. Car fares & check for online discounts & deals on Nagpur To Pench car taxi service.? No Extra-Charges. Call 8888807783. Nagpur is a large city in the central Indian state of Maharashtra. The 19th-century Nagpur Central Museum displays items found locally, including fossils, sarcophagi and Mughal weaponry. The Raman Science Centre has hands-on exhibits and a planetarium. Sitabuldi Fort, in the Sitabuldi Hills, was the site of an 1817 battle. To the southwest, the immense, domed Deekshabhoomi is a Buddhist monument and pilgrimage site.

Pench National Park is in Seoni and Chhindwara districts of Madhya Pradesh in India and includes Pench Tiger reserve. It derives its name from the Pench River that flows through the park from north to south dividing the park into almost equal western and eastern halves, the well-forested areas of Seoni and Chhindwara districts respectively. It was declared a sanctuary in 1965 but raised to the status of national park in 1975. In 1992, it was established as a tiger reserve.

Distance and time for travel between Nagpur To Pench cab distance

Distance between Nagpur To Pench is 77.8 km by Road along with an aerial distance. The Distance can be covered in about 01 hours 56 minutes by Nagpur To Pench cab. Your Pench travel time may vary due to your bus speed, train speed or depending upon the vehicle you use.

Spots to Visit in Pench

When renting a car for rent car for Nagpur To Pench, its best to book at least 1-2 weeks ahead so you can get the best prices for a quality service. Last minute rentals are always expensive and there is a high chance that service would be compromised as even the taxi provider is limited to whatever vehicle is available at their disposal.

The best time to visit Pench national park is from February to April. The park remains open from 16th October to the end of June and closed during the monsoon from July to early October every year. During the rainy season, Pench jungle Safari is not allowed like in other national parks in Madhya Pradesh.

Nagpur To Pench One Way Taxi

Why should we go with car on rentals for Nagpur To Pench by car book?

When you rent a car from Nagpur To Pench taxi services, we'll help you pick from a range of car rental options in Nagpur . Whether you're looking for budget cars, comfortable cars, large cars or a luxury car for your trip- we have it all.We also provide Tempo Travelers for large groups. Nagpur To Pench car hire,You can choose between an Indica, Sedan, Innova or luxury cars like Corolla or Mercedes depending on the duration of your trip and group size.